01. Project overview02. What were the challenges?03. The solution04. What’s installed?05. Energy generation & storage facts06. The result

EO Charging recently installed 50 EO Genius charge points at Aviva’s Perth office as part of the company’s new solar carport and energy storage installation – one of the largest of its kind in the UK.

The new facility, designed to support employees in switching to electric vehicles, is expected to contribute a carbon saving equivalent of powering over 500 homes, or a small town every year. 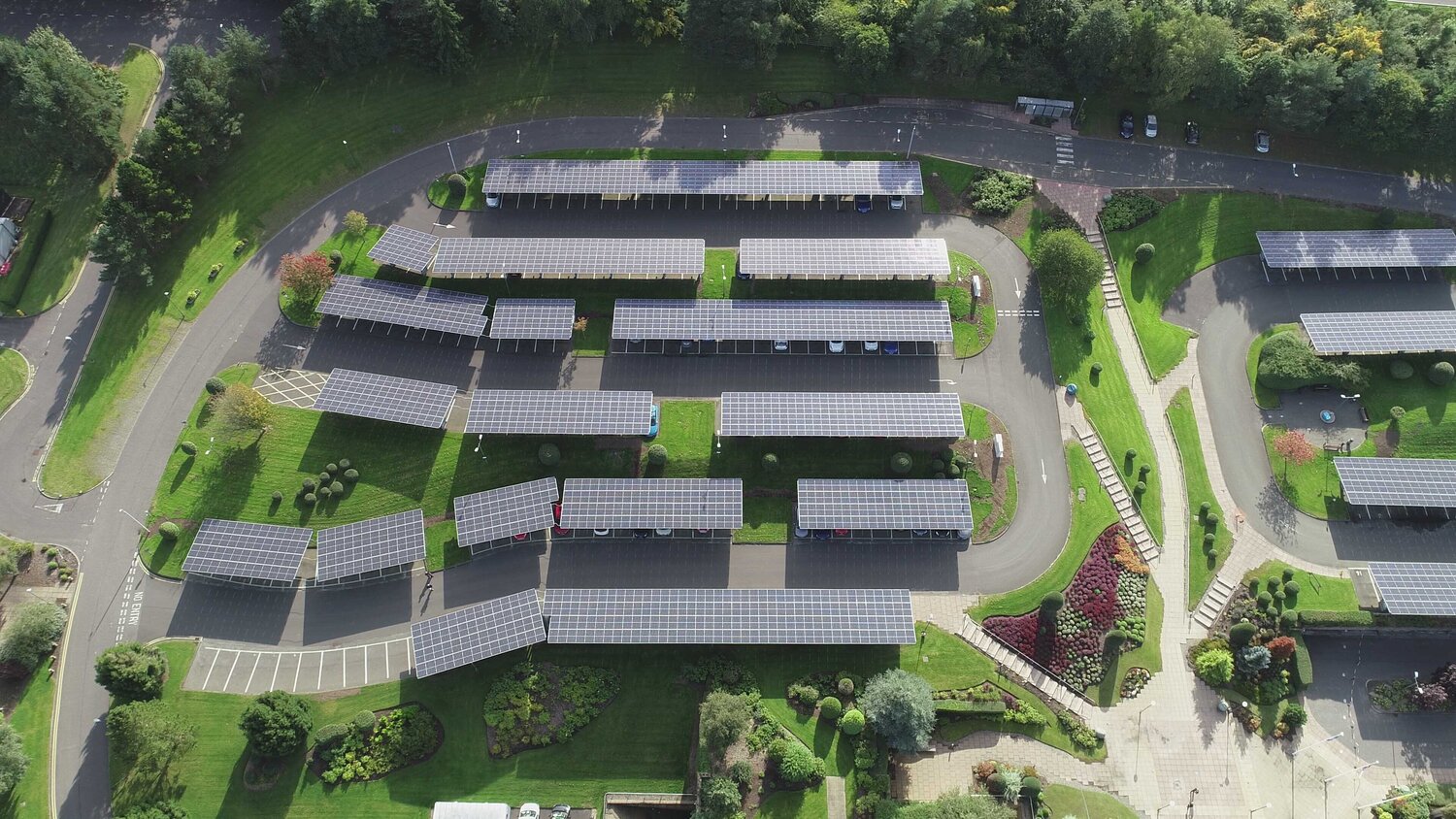 Aviva wants to increase electric vehicle (EV) adoption rates across the business whilst playing a part in creating and saving green energy. Aviva currently employs around 1,000 people at its Perth office and needed charging infrastructure that could be scaled up to meet increasing demand over the coming years.

As a business, Aviva is committed to tackling climate change – it was the first carbon-neutral international insurer in 2006 and is a member of the United Nations Net Zero Asset Owner Alliance, which commits to net-zero emissions in investments by 2050.

The company already has several environmental initiatives across its UK sites including the installation of solar carports at its Norwich office and on-roof solar in three UK locations, only purchasing electricity certified by the Carbon Trust, as well as carshare scheme, zero waste to landfill, the removal of single-use plastics and onsite beehives.

Aviva found that 35% of Scottish people believe there is a lack of electric charging infrastructure in Scotland, though more than 2 in 5 drivers currently own a petrol/diesel car say that they would be more than likely to transition to an EV or employer support.

02. What were the challenges?

Providing sufficient power for 50 EV charge points, with scope to potentially increase to more than 300 parking spaces in future is a big ambition. This, combined with Aviva’s desire to support employees who want to drive vehicles powered by green energy, meant the company had a challenge on its hands.

Aviva knew that the project required experts from across the sustainability industry – from solar generation to energy storage and EV charging. The company enlisted the support of Ren Energy (part of EO’s ‘Official Partner Network’) to manage the project.

One of the biggest challenges was ensuring there was enough available power to charge all employee’s cars when plugged in. Aviva also wanted a future poof charging system that was reliable, easy-to-use and would scale from an initial 50 charge points as more employees switched to driving electric vehicles.

The final challenge was to ensure that the available power was safely distributed across the full EV charging network, allowing all employees to leave the site with enough charge to get home.

EO Charging, which offers end-to-end charging systems for some of the world’s biggest businesses and fleet operators, was able to create a fully bespoke solution in partnership with Ren Energy – from charge points and management software to design and installation.

The project team selected the EO Genius 22kW charge point, with built-in active load management, to enable the safe distribution of power across the site. The charge points were installed on solar carports made from 100% recycled steel and are available to all Aviva employees.

The 50 EO Genius chargers were connected to two EO Hubs – a separate smart unit that acts as the ‘brain’ of the charging system. Up to 30 EO charge points can be connected to a single EO Hub, allowing Aviva to easily scale their charging infrastructure in the future alongside the increasing number of employees driving electric.

The installation is powered by 3,283 solar Photovoltaic panels, which support the dedicated EV charging bays and can charge 50 electric vehicles at once. This green technology generates a staggering 812,000 kWh. Aviva plans to use 77% of the generated energy for the building lighting, air-conditioning and external security lighting with the surplus entering the battery storage system for later use or exported to the grid. The system’s annual output will power an electric car for 2,249,240 miles (or the equivalent of 90 trips around the world).

It’s vital that businesses in all industries put words into action when it comes to tackling the climate emergency. That’s why we are taking strides to reduce our environmental impact and partner with leading technology specialists to help make that happen.

The Perth solar and storage initiative is a great example of how Aviva is innovating to secure a sustainable energy supply and support the electric vehicle revolution.

EO Charging & Ren Energy’s approach to solving the challenge of charging at the workplace enabled Aviva to take a further step towards a greener future. Employees are now able to power their vehicles whilst at work and reduce their carbon emissions when commuting to the Perth office.

The carefully designed solar-powered EV charging infrastructure will allow Aviva to cost-effectively scale the number of operational charge points at the Perth office as more employees convert to EV.

Speak to an EO expert.

To find out more about the range of options available to businesses looking to offer electric vehicle charging for its employees, click on the button below.